It is every girl’s nightmare to end up wearing the same dress as someone else at a party. And when it’s these gorgeous actresses, it’s a complete no-no.
We agree looking fabulous at all times is a full time job, but we also believe that these leading ladies can afford stylists who can keep a tab if the dress they are in, wasn’t already worn by other celebrities – and maybe they even looked better in it! While some of our favorite celebrities lose sweat over these huge fashion faux pas, we sit back with our slice of nutella bread and argue over who wore it better? Well, at least that’s the case in the HBM office. 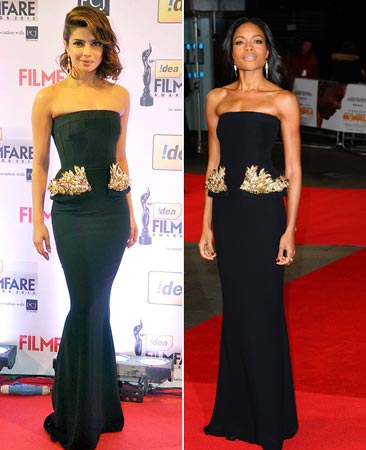 1.Priyanka Chopra and Naomie Harris
British actress Naomie Harris wore this beautiful Alexander McQueen gown for the screening of Mandela: Long Walk to Freedom in 2013. While our own Piggy Chops AKA Priyanka Chopra wore the exact same gown to Filmfare Awards. Exactly an year later. Although we believe Priyanka looks stunning in this dress with every inch of it hugging her curves perfectly, she should still trash her stylish, like right now! 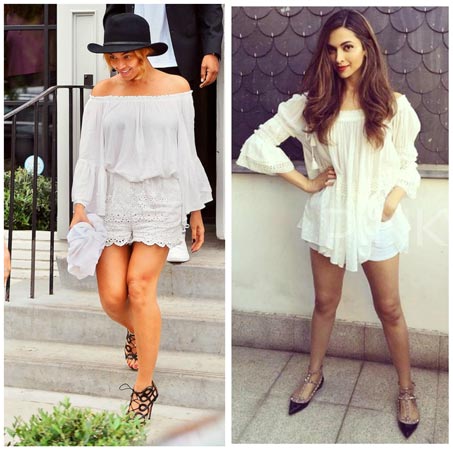 2. Beyoncé and Deepika Padukone
Beyoncé (hail to the queen) wore this Aquazzura white off-shoulder top with lacy white shorts in 2015 and exactly an year later, Deepika Padukone rocked a very similar top from Chloe with denim white shorts. Hands down, we love both the looks equally! 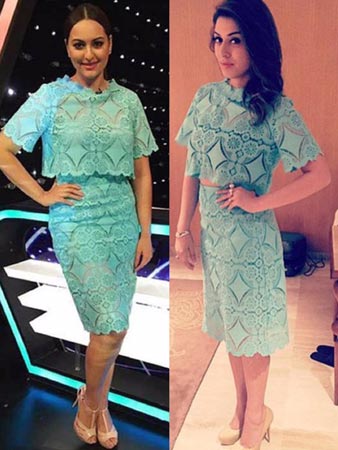 3. Sonakshi Sinha and Hansika Motwani
Sonakshi wore this beautiful blue Madison on Peddar crop top and skirt to Indian Idol junior and Hansika wore the same co-ords for the promotions of Romeo and Juliet. Both these ladies styled it very differently. While Sonakshi Sinha kept her hair in a sleek ponytail with no accessories, Ms. Motwani had her hair open and wore pearl rings. They look so stunning that it is difficult for us to say who wore it better! 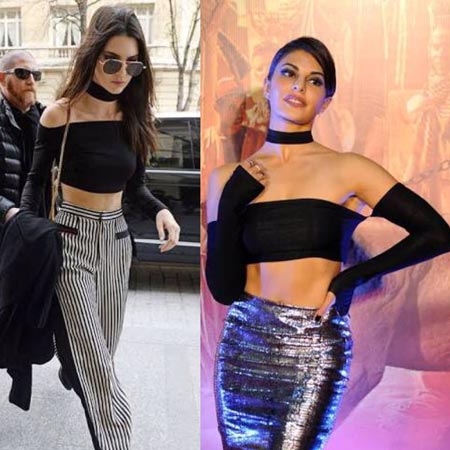 4. Jacqueline Fernandez and Kendall Jenner
The choker neck off-shoulder trend has been around for quite some time now. Supermodel Kendall Jenner was seen wearing one on the streets. She looked quite at ease and pulled it off like no other. Meanwhile our bubbly queen Jacky wore the exact same top for her film, Dishoom trailer launch. Her beauty shines through everything, but this look quite didn’t work that well for her! I mean, does anyone remember how awkward and uncomfortable she looked in this? 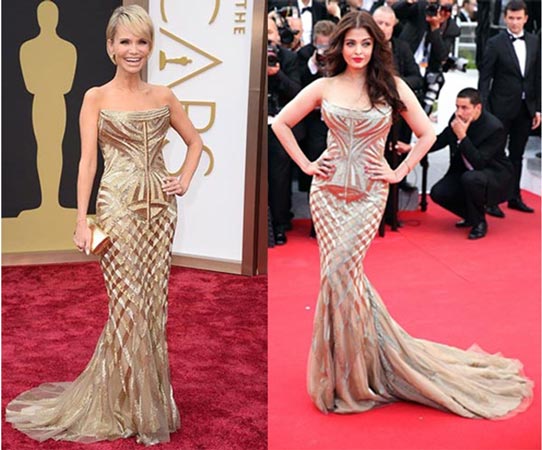 5. Aishwarya Rai and Kristen Chenoweth
When we talk about Cannes Film Festival, the first thing that comes to our mind is Aishwarya Rai in the knee-weakening Roberto Cavalli golden gown. Her gown made us fall in love with her, all over again! Hollywood actress Kristen Chenoweth was spotted in the exact same dress at the Oscars the very same year. Who wore it better you ask? Aishwarya Rai Bachchan, ofcourse! 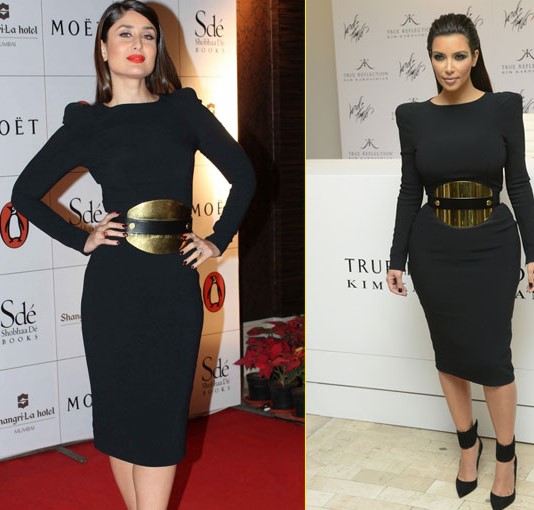 6. Kareena Kapoor and Kim Kardashian
Kim Kardashian barely goes wrong with her outfits but she looks like she won that golden belt at a wrestling competition. While Bebo AKA Kareena steals our heart in the same Tom Ford dress! 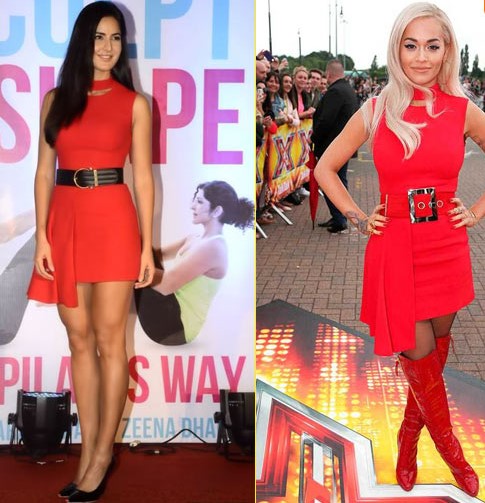 7. Katrina Kaif and Rita Ora
We love your music Rita, but you really went over the top with that big red belt and knee high red boots. However, Katrina on the other hand stuns everybody in the same Versace dress. Compared to her, Rita really looks like a tomato! 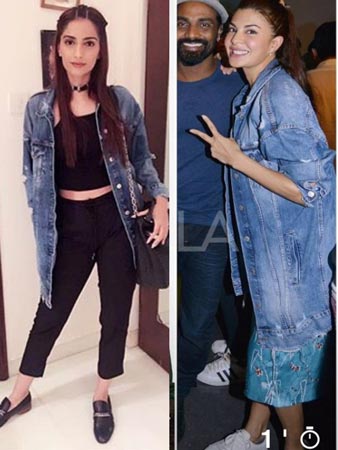 9. Priyanka Chopra and Frieda Pinto
Either Priyanka is going to too many events that she ends up picking an already worn dress or her stylist is just too lazy! Both these ladies look like Grecian Goddesses in this Salvatore Ferragamo draped gown but definitely Priyanka wore it better! What do you think? 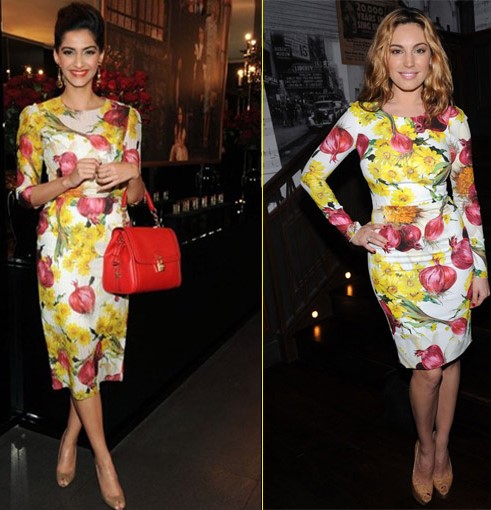 10. Sonam Kapoor and Kelly Brooks
Kelly, we love you, but Sonam totally owned the Dolce and Gabanna dress. Compared to Sonam’s bright red lips and her red bag, Kelly looks too casual. Kelly, we have advice for you, ask how to do it from Sonam the next time!

Tell us in the comments below who you think wore it better?