VJ Bani has become a household name in the past few days’ not because of her work which should be the reason, but due to something very demeaning. I can bet that half of us still know her as the Roadies’girl and didn’t have the slightest inkling of her recent work until she pointed out herself, as we have far more important matters to attend to, like body shaming.

‘Lifting weights will make you look manly’I ‘You’re not a girly girl if you lift weights’ ‘I don’t lift weights because I just want to ‘tone up” ‘Girls should only do cardio, lifting is for guys’ ‘So what steroids are you on’ ‘That’s way too much muscle.. For a woman’ _____________________________________________ All of the above and so much more. I’ve heard it all. And not once because I actually cared enough to ask, ‘hey, what do *you* think of *my* body?’. I never entered the gym because of what people said I ‘should/ ought to/ must’ look like. I went in there to get strong, to be active, to be healthy, to sweat = to feel better, and more ME. ____________________________________________ I can’t remember the last time the thought of ‘will this be attractive to so and so’ crossed my mind in relation to myself – let alone to me lifting weight. It doesn’t happen. I love me so much and that’s all that matters, I am so happy (blame all the endorphins) doing what I do day in and out that all else is tuned out. This is something I’ve gotten better at accepting and allowing day by day. That’s why you will always hear people say ‘it’s not just physical, it’s so much more MENTAL’ because to get to where you want to go, you have to look within and really be true to yourself and know that yes, this is what I’m about. This is what matters, this puts me in alignment and makes me a more joyful happy productive being. And guess what? You’ll end up inspiring and encouraging and being that source for other people along the path too. I don’t go around telling people they should eat healthier or lift or try to lose weight, you do you. I’ll do me. If someone asks for help I will always do what I can, I recognise the quest – but you need to recognise whether the desire really is there in you or not. Why else do you think we don’t see more people walking around with their Tupperware containers looking hench af? Because, if your hearts not in it, no matter how much you try – you’ll never get there. Cold hard honest truth. Just like cold hard iron, work and discipline. Just wanted to share that with y’all fam. Do you 🙌🏽💛 #doyou #everyday #womenwholift #loa

Her brass reproach against her body shamers in her recent Instagram post was much needed. The post, which went viral swiftly and made headlines in just a blink of an eye not only points her as a strong woman but also mirrors the deep misogyny which runs in the Indian community. And the issue is not just men but also women as pointed out by Bani herself. In an interview given to HT Brunch  ‘No one, neither men, nor women, could get it. Why do you work out so much? Muscles for a woman… why? Are you really okay, or do you need help?’

It is ironical that the people, who are shaming her, ‘offering her help’ and questioning her mental state are the ones who indeed need help. A woman’s body and her choices have long been a bone of contention in our society, which is already plagued by more serious diseases like corruption and terrorism. Yet the only ‘issue’ which can grab attention is a ‘woman’s body.’  We are born and brought up in a sexist society where the roles of men and women are fixed and any diversion from it by either sex is unendurable.

The whole idea of a woman’s body is romanticized. Throughout the centuries, the society has been fostering an ideal body type which corners extremely thin or fat women. Our Bollywood film industry is the biggest example of body shaming, which under the guise of a ‘perfect’ or ‘healthy’ body promotes ‘certain body types’. The industry has long shunned many actresses who failed to fit into the ‘desired category’ despite being extremely talented like Parineeti Chopra, who is still not considered as one of the top actors even though she is a national award winner.

Came across these pics of mine from school and college days. (White one was in std 9th & pink one was right after my std 12th exams). Whn I look at these pics I feel proud of myself today not tht I felt any lesser abt myself back then. Inspite of being so big I never let ppl’s comments or ideas abt me bother me. Bcoz it’s my life and my body and only I hav the right to decide wht I’m gonna do with it. Then one day I decided let me try how it feels to b a little lighter and hence started my weight loss journey. It wasn’t easy at all bt everytime I looked at the Progress in the mirror I got the push to do more. I had lots more energy than before and I was loving every bit of this new person I was transforming into. Whn I became a part of this industry, I had lost all my weight … Infact I was asked to put on weight Fr my first film to look the character. Unfortunately I was criticised to no end Fr my weight bt again I never let tht get to me. How cud I ? Those ppl had not seen me like the way I am in these pics here. And Fr me everything was jus an achievement to reach frm where I was to where I am. I continued on my fitness journey irrespective Bcoz fitness Fr me is a way of life now. Along with the weight loss came a lot of stretch marks bt instead of feeling ashamed of it and trying to hide it , I believe in flaunting it . It makes me feel like a tigress with her stripes. I have come a long way in this journey of fitness and I still hav a long way to go… Bt it’s always been only Fr myself and not Bcoz of ppl shaming me ! #IWillBeMe #MondayMotivation #SayNoToBodyShaming #LoveYourself

Other equally talented actresses like Sonakshi Sinha, was referred to as a ‘carb’ (which is not fit to date anyone) at All India Bakchod’s show or Zarine Khan, who like VJ Bani, too shared a post few months ago, where she finally spoke against body shamers. She made it clear that gaining or losing weight should be solely a personal choice. However, our society, which seems to be too busy to pay heed to public matters has surely plenty of time to intrude into the private space of a woman.

The idea of a ‘perfect body’ or better say ‘girly body’ have been doing the rounds for generations. Right from our birth, women’s are dictated to wear ‘certain kind of clothes’ and are often ridiculed when puberty hits them and changes in the body, due to hormones, becomes palpable. It comes as no surprise that Aishwarya Rai Bachchan once was at the receiving end of her ‘fans’ criticism after she put on weight after pregnancy. 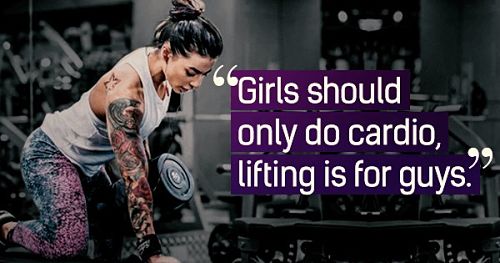 We live in a world where the third wave of feminism is at its peak and participation of men is not negligible, but there still exists a section, which is neither inconsequential nor miniscule, which ridicules women’s body and puts pressure on them to stay ‘feminine’and ‘thin’ and not try anything ‘muscular’ as it is the domain of ‘men’.

Well we are proud of our girl, VJ Bani and she not only looks kick ass but her sheer determination to stay fit truly inspires us!