If there is one role for which we will always remember Kareena Kapoor, it has to be the role of ‘Geet’ in ‘Jab We Met’ .Apart from her kickass acting in the movie, what we also remember is Kareena’s minimal makeup . Donning casuals and flip flops throughout the movie, she still looked breathtakingly beautiful. With her de-glamorized avatar, she wasn’t just her favorite but everyone’s .

We are used to seeing actors and actresses disguised in layers of makeup to appear beautiful on screen. We all must have at least once envied their flawless beauty and radiant skin. But have you ever wondered that how these actresses look sans make up? With the popularity of de-glamorized roles growing,  actresses are coming out of their shell to pose for the shutterbugs without makeup. Kareena, of course, being one of them. The actress has been clicked without make up a million times and we must say she is one natural beauty. Here are 10 pictures of Kareena Kapoor without makeup. 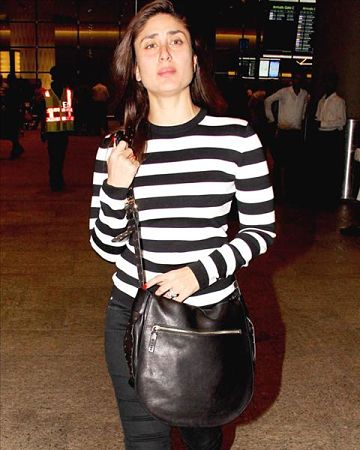 1) Kareena Kapoor in Casuals : Dressed in a simple striped tee with a sling bag, Kareena was spotted in sans makeup at the Mumbai International Airport leaving for IIFA Awards in 2014. Isn’t it surprising that with her frowned face, weary eyes and dark circles, she still manged to look simply gorgeous. 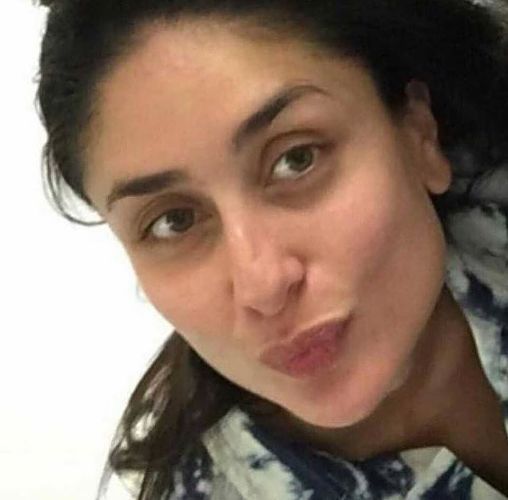 No Makeup Pictures of  Kareena Kapoor

2) Bollywood Actress Without Makeup: This simple and natural picture of Kareena proves she is the epitome of natural beauty. It’s surprising to see that how her beauty remained undaunted by years of shooting in the sun, stress and tiring schedule. Dressed in a shirt, there isn’t a single layer of make up on her visage. With a slight pout, the actress looks breathtakingly pretty. 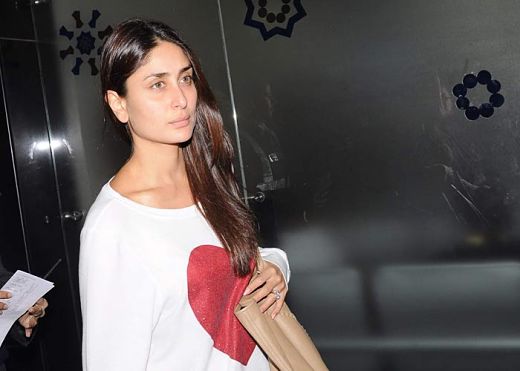 3) Images of Kareena Kapoor Sans Makeup : Dressed in loose white tee with a heart on it, she really won our hearts with her makeup free face. This is quite an old picture where she was seen leaving  for vacations with Saif Ali Khan after completing the shooting of her movie ‘Heroine’. Seen without any accessories, lipstick or kajal, the actress yet again proves that she doesn’t need makeup to look beautiful. 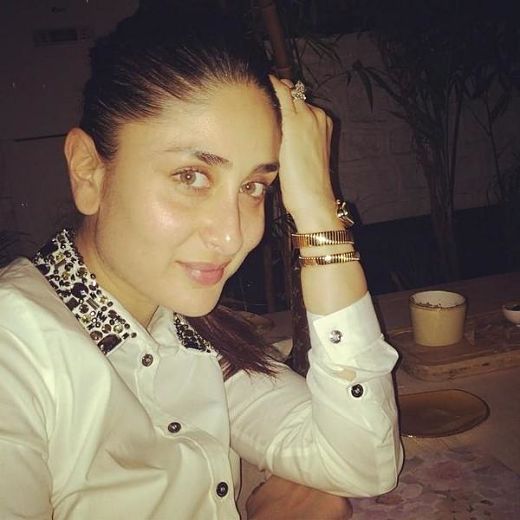 10 Images Of Kareena Kapoor Without Make Up

4) Bollywood Celeb Kareen Khan: Snapped at Karan Johar’s place, this picture of Kareena Kapoor completely leaves us in awe. Dressed in a white embellished shirt, with a sleek ponytail and a Bulgari Serpenti watch, the picture couldn’t have been more beautiful. Her radiant smile adds to her beauty. 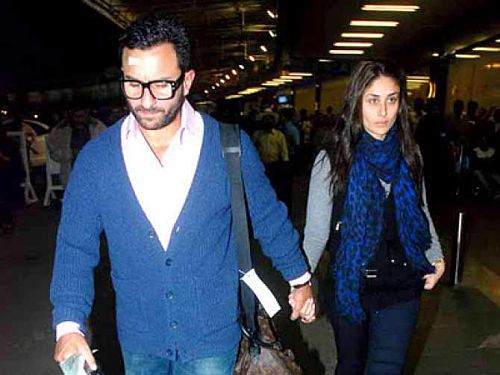 Pictures Of Bebo Without Makeup

5) Kareena Kapoor’s Vacation Mode: Walking hand in hand, the much love in couple looks beautiful together. Donning a serious face with her hair not in place, the actress nonetheless looks beautiful. Her high cheekbones has us all envious! She was spotted leaving for a vacation to spend some quality time with her now hubby, Saif Ali Khan. 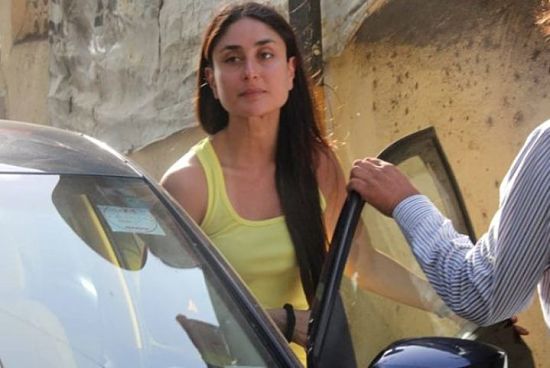 6) Bebo Spotted At Bandra: Before getting into the car, the actress didn’t shy away to face shutterbugs in her de-glamorized avatar. Dressed in a casual yellow tank top, with her hair all straight and loose, she was snapped at Bandra before the shooting of ‘Bajrangi Bhaijaan’. Her fair, radiant skin slays us yet again! 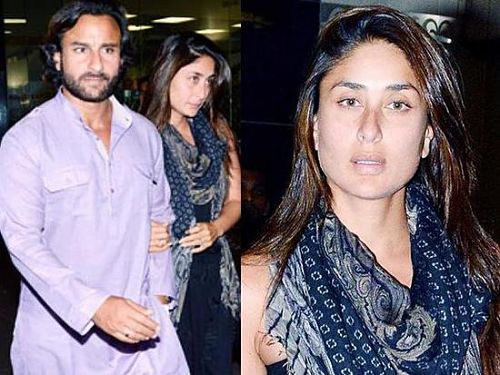 7) Spotted with Saif Ali Khan: Draped in a blue stole, Kareena Kapoor Khan looks tired yet so beautiful despite the no makeup face. We love how clear and glowing her skin is.

8) Spotted with Karishma Kapoor:  Dressed in casuals with her hair tied in a ponytail, the actress was snapped with her elder sister, Karishma Kapoor, who also looks terrific sans makeup. The genetically blessed sisters’ didn’t shy away from posing for the cameras in their bare, no make up face. 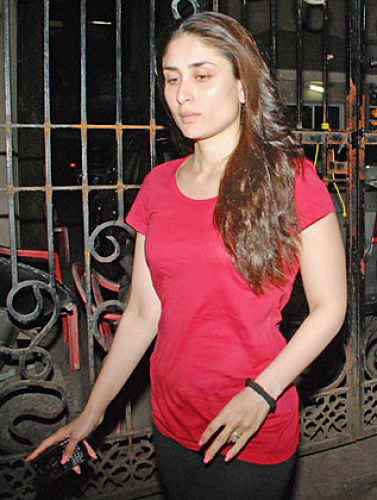 9) At Malaika Arora Khan’s Place : Dressed in a plain red top with leggings, the actress was seen outside Malaika and Amrita’s house after the news of Saif’s infamous brawl hit the headlines. Though devoid of a smile, with dark circles clearly visible, she still  managed to look fairly presentable . 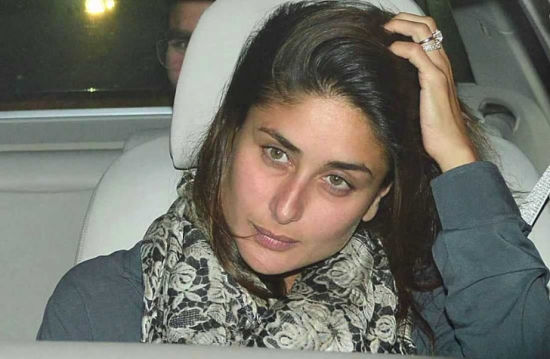 10) Top Bollywood Actress Without Makeup: Comfortably seated in the car, Kareena’s impeccable beauty always manages to leave its mark ! Her rosy cheeks, a dash of lip balm and kohl free eyes show that she is confident in her own skin.

These were some of the pictures of Kareena Kapoor without makeup. The actress undoubtedly looks beautiful in these images. Though her face and eyes look weary at times, her confidence covers it all and adds to her beauty.