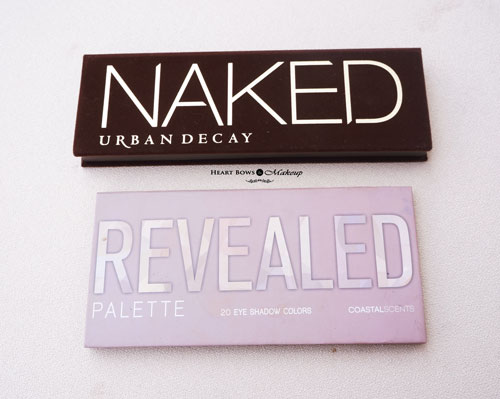 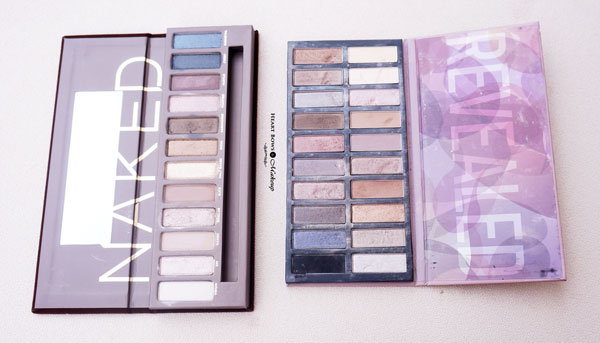 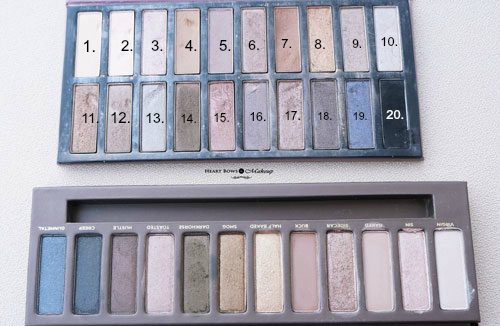 Shades
Both the palettes have warm neutral colors from the gold-bronze family with a few blue and pink toned shades here and there. These eyeshadows would look great on any skin tone, especially medium to olive skin tones. Majority of the Urban Decay Naked shades have close dupes in the Revealed palette which are as follows.

The colors Naked, Buck and Sidecar do not have true dupes in the Coastal Scents palette.

Texture & Pigmentation
The Urban Decay Naked eyeshadows are soft like butter and blend in seamlessly. None of the shades are chalky or patchy. They have great pigmentation apart from the color Creep. The glitter in Creep and Halfbaked from this palette have some fallout. Whereas, the Coastal Scents Revealed palette’s eyeshadows are also very soft and blend well. None, of the shades (described as dupes to the Naked palette) go patchy or chalky. They are slightly less pigmented and slightly less buttery in comparison. Most of the shimmer shades from Coastal Scents do result in some amount of fallout.

Staying Power
With a primer underneath, the shades in the UD Naked palette stays put for a good 7-8 hours. In comparison, the Coastal Scents Revealed eyeshadows give a wear time of about 5-6 hours after which they starting creasing.

HBM Verdict: There isn’t much of a difference in terms of the shades included in the UD Naked & CS Revealed palettes. Instead you get 10 more shades in the Coastal Scents palette. The eyeshadows in the Revealed palette are slightly less pigmented and aren’t as long lasting as the UD ones. However, the CS palette is almost half the price and is definitely the best dupe for the Urban Decay Naked Palette.